A sustainable alternative to high-maintenance lawn grasses, needing little watering, fertilizing, pesticides or mowing. Buffalograss lawns are a little shaggy and, because buffalograss is a warm season grass, it turns brown in the fall and doesn’t green up until spring. Unlike conventional lawns of cool season grass though, it remains green throughout any but the worst dry spells of summer. Buffalograss is unusual in being dioecious – male and female flowers occur on separate plants. The male flowers are similar to those of a relative Blue Grama (Boutelou gracilis) though not quite as showy.  And yes the common name is well-founded – this species was and is an important forage species for herds of bison on the Plains and Prairies of North America. 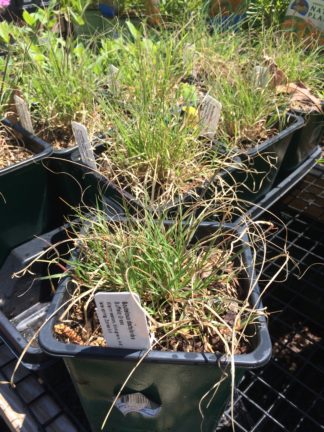