This lovely, small-flowered clematis has been listed as belonging to a number of species or crosses: C. heracleifolia, C. heracleifola var. davidiana, C. x jouiniana, and C.  tubulosa. The mystery surrounding its parentage arose because it’s a spontaneous hybrid – created by bumblebees, not horticulturists. It first appeared in the garden of Mrs. Elizabeth Prentiss of Cleveland, Ohio sometime in the 1930s, and was named after the wife of her gardener, Robert Brydon. It’s now thought that C. tubulosa from China is indeed one of the parents but that the other parent is our native Virgin’s Bower, C. virginiana. Whatever its parentage, the clouds of pale blue flowers are quite ornamental. The plant form is somewhere between the shrubby C. tubulosa and the scandent C. virginiana – it leans and clambers rather than climbs.

This is the “Plant Shop” website for Catskill Native Nursery where you can view plants we have for sale. YOU CANNOT PLACE AN ONLINE ORDER FOR OUR PLANTS ON THIS SITE. We are endeavoring to keep the site up to date with actual inventory available at the nursery, but cannot guarantee that every plant on this site is indeed available. Our inventory is in constant flux and it’s a bit of a challenge to keep it up to date, especially during the Spring rush of purchasing. Conversely, there may be plants available at the nursery that we haven’t yet published on this site. For more information about the nursery please visit our primary website at catskillnativenursery.com

Masks are required for nursery visits and please try to minimize the number of people in your group. While we would love to socialize, please make any visit a plant-buying excursion, not a social outing. 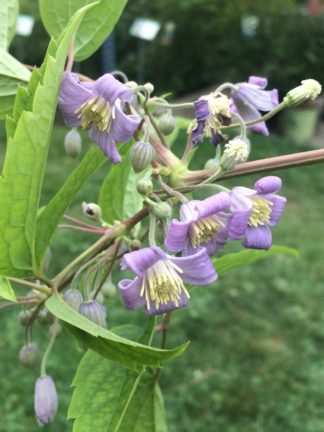