These are mostly Hosta sieboldiana though there may be a few plants of an unknown variegated variety in a pot. They are a flat green color – not much blue in their foliage, even newly emerging Spring foliage doesn’t have any blue color in it.

“Hosta sieboldiana is a large hosta native to Japan. It is a clump-forming perennial that typically matures in a spreading foliage mound to 24″ tall and to 48-60″ wide. Thick, puckered, cupped, wide-oval, green leaves (to 14” long and 12” wide) have distinctive veining, cuspidate tips and cordate lobes. Leaves often emerge smoky-blue in spring. Funnel-shaped, mostly white (sometimes lilac tinged at the base) flowers appear in early to mid summer in racemes located slightly below to slightly above the foliage atop upright leafy scapes rising to 25″ tall.”

Hosta is a member of the Asparagus family and all species are edible! In this country we value them for their ornamental foliage and tough demeanor, but in Asia they are frequently grown as food – called “Urui” when used as a vegetable.

Harvest “hostons” (Hosta shoots) in the spring before the leaves have finished unfurling, while they are still tender, either by cutting or snapping them off. You can harvest as much as a third of the shoots without affecting the plant’s vigor. Don’t dally – the season is fairly short – leaves get tough and bitter as they mature, and flavor is best when they are young.

Later this year we will have Hosta ‘Sagae’ (Hosta of the Year 2000) available – it’s very popular for its cream-margined glaucous leaves. It was actually found in a field of H. fluctuans being grown for food in Japan not in a ornamental horticulturist’s garden.

This is the “Plant Shop” website for Catskill Native Nursery. Here, you can view plants we have available for purchasing at the nursery. YOU CANNOT PLACE AN ONLINE ORDER FOR OUR PLANTS ON THIS SITE. We are endeavoring to keep the site up to date with actual inventory available at the nursery, but cannot guarantee that every plant on this site is indeed available. Our inventory is in constant flux and it’s a bit of a challenge to keep it up to date, especially during the Spring rush of purchasing. Conversely, there may be plants available at the nursery that we haven’t yet published on this site. For more information about the nursery please visit our primary website at catskillnativenursery.com

Masks are optional for nursery visits if you have been fully vaccinated. 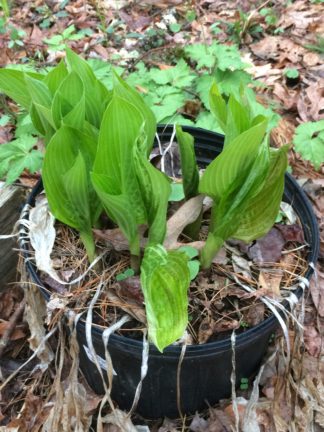