A honeysuckle that produces sweet/tangy edible fruits. Native throughout the cool temperate Northern Hemisphere, including the northwestern United States and northern Rocky Mts. The most popular varieties have been selected from plants growing wild in Siberia (var. edulis) and Northern Japan (var. emphyllocalyx). The berries ripen earlier than any other fruit. Flowering occurs in very early Spring – the varieties below all are considered “late-flowering” and will usually avoid late Spring frosts. Self-infertile – plant more than one variety in order to get berries. Likes a moist – even a little boggy, cool location – mulch heavily and provide afternoon shade. Birds find honeyberries as tasty as blueberries – it may take them a few days to recognize the unfamiliar fruit, but without protection birds will eventually strip the shrub of fruit.

This is the “Plant Shop” website for Catskill Native Nursery. Here, you can view plants we have available for purchasing at the nursery. YOU CANNOT PLACE AN ONLINE ORDER FOR OUR PLANTS ON THIS SITE. We are endeavoring to keep the site up to date with actual inventory available at the nursery, but cannot guarantee that every plant on this site is indeed available. Our inventory is in constant flux and it’s a bit of a challenge to keep it up to date, especially during the Spring rush of purchasing. Conversely, there may be plants available at the nursery that we haven’t yet published on this site. For more information about the nursery please visit our primary website at catskillnativenursery.com

Masks are optional for nursery visits if you have been fully vaccinated. 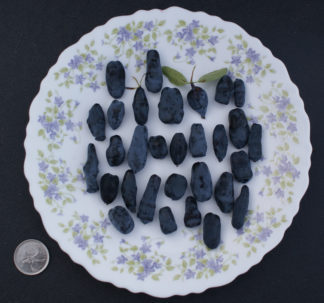