The Northeast’s most popular apple in the second half of the 19th century, ‘Baldwin’ originated in Wilmington, Massachusetts, in 1740. The variety was first named ‘Woodpecker’ because the trunk of the original tree had been assaulted unmercifully by woodpeckers, and then ‘Butters,’ after the orchard’s one-time owner. The skin is thick and on the tough side. Flesh is yellow, crisp, coarse and juicy, with a spicy character that is good in cider and pies. Keeps well and ripens in late September or October. ‘Baldwin’ is a triploid variety and not a good pollenizer for other apples.

This is the “Plant Shop” website for Catskill Native Nursery where you can view plants we have for sale. YOU CANNOT PLACE AN ONLINE ORDER FOR OUR PLANTS ON THIS SITE. We are endeavoring to keep the site up to date with actual inventory available at the nursery, but cannot guarantee that every plant on this site is indeed available. Our inventory is in constant flux and it’s a bit of a challenge to keep it up to date, especially during the Spring rush of purchasing. Conversely, there may be plants available at the nursery that we haven’t yet published on this site. For more information about the nursery please visit our primary website at catskillnativenursery.com

Masks are required for nursery visits and please try to minimize the number of people in your group. While we would love to socialize, please make any visit a plant-buying excursion, not a social outing. 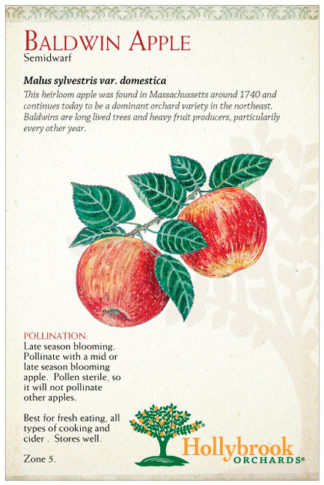