From Sternberg and Wilson’s Native Trees: “Unlike its weedy exotic cousins, which neither receive nor deserve much respect in horticultural circles, our native mulberry is a handsome, unaggressive forest tree. It inhabits rich, fertile, mesic forest soils, rather than the sidewalk cracks favored by the exotic species, and becomes a vase-shaped spreading shade tree in the open, reminiscent of a small American elm.”

The fruits are tastier than exotic mulberries and are a bird and human favorite. For fruit production, plant a few trees because individual trees are either male or female. Most of our trees are too young to have flowered so we generally don’t know if a particular tree we are offering is male or female.

Red Mulberry is native to New York and Ulster County – its stronghold is the central United States – from New Jersey to Kansas south to Texas and Florida. It becomes less common northward. Over most of this wide range it encounters the introduced White Mulberry (M. alba) and the two trees hybridize. In fact it can be difficult to find non-hybrid trees in the wild – it’s possible our trees have some White Mulberry in their parentage. 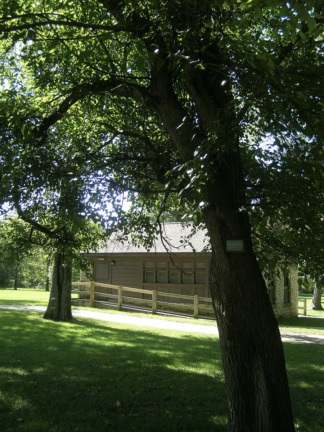