What a great aster! Late-blooming, often flowering right up to the first hard frost. Large, showy flowers that smother the plant. Aromatic foliage that deer and rabbits find unpalatable. Drought tolerance, making it a perfect choice for a hot, dry spot. Dense, compact, bushy form and a moderate spreading tendency. Like all Asters, it’s a good food plant for butterflies, bees and other beneficial insects. The stronghold of Aromatic Aster is the Great Plains from Minnesota to Montana south to Texas. It also occurs sporadically in the southeast and reaches as far to the northeast as central Pennsylvania. Given that range, it’s not surprising that it has a preference for calcareous soils, but it seems to be quite adaptable to our area’s acidic soils. Simply put, one of our favorites – not just amongst the asters but amongst all natives!

A little bit taller, a little bit later blooming  with a little bit larger flowers than most Aromatic Asters. In 2016, ‘Raydon’s Favorite’ was named Plant of the Year by The Garden Club of America.

Originally introduced to horticulture through Raydon Alexander, a plantsman from San Antonio.  The plant had been grown in Southern Texas for years, almost becoming a garden heirloom – Alexander sent some to Allen Bush who owned Holbrook Farm and Nursery, stating that it was his favorite fall-blooming aster.

Though it had been grown in Texas for years, it appears the original plant matches up with strains of Aromatic Aster from East Tennessee; a gardener must have noted a particulary nice specimen and brought it back to Texas.  A strain growing on Lookout Mountain has fairly similar characteristics, and this popular tourist destination may very well be the original source of ‘Raydon’s Favorite’ aster.  The whole story can be read here: https://www.gardenrant.com/2016/03/when-the-aster-hitched-a-ride.html 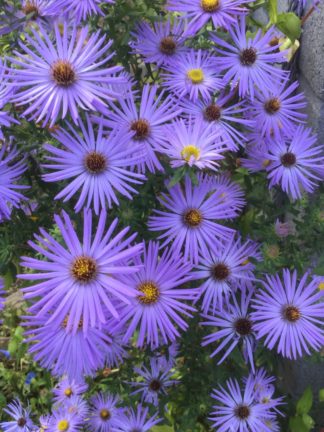